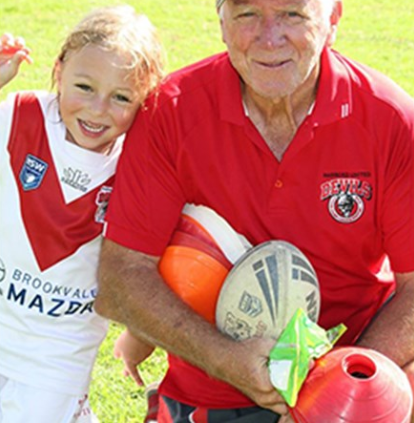 Harbord United Devils Junior Rugby League stalwart Bob Butcher, who has dedicated more than 40 years of his life to Rugby League and kickstarting the careers of local juniors including Steve Menzies, has this week been recognised by Sport NSW with a 2020 Community Sports Award for Distinguished Long Service.

Butcher 72, has held positions including Coach, Manager and Secretary with Harbord United, as well as Registrar for the Manly-Warringah District, and is still actively volunteering his time within the Junior Rugby League community.

Butcher has played an integral role for Harbord United as the first person to introduce children to the game, including Sea Eagles legend and True Blue Steve Menzies who joined the club in 1980 before going on to make his first grade debut in 1993.

“I initially started for my kids, and I enjoyed meeting people and being a part of it,” said Butcher.

“It’s good fun, you just teach what you can and the rest is about having fun. That is what keeps everyone in the game longer.

“It is rewarding to see someone go on to play for Australia, it is a highlight.”

Menzies paid tribute to Butcher and described him as the backbone of the local club.

“Bob does so much for the community and never wants any raps for it, he is just always happy to do it,” said Menzies.

“He will be up there at the grounds in the early mornings when it is 2 degrees, doing the lines.

“We need guys like him around, he is a champion.”

A Life Member of Harbord United and of the Manly-Warringah District, he is known for his incredible knowledge of the operation of the Junior Rugby League District and continues to mentor many young parents at Harbord United JRLFC.

He is now coaching his grandson, passing on all his knowledge of Junior Rugby League.

NSWRL Chief Executive David Trodden congratulated Butcher on his deserving recognition and thanked him for his incredible service to the game.

“Volunteers are the heart and soul of all community sport and our game could not survive without the selfless commitment and dedication of people like Bob,” said Trodden.