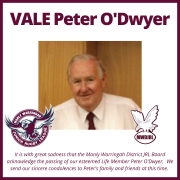 The Manly Warringah District Junior Rugby League Board would like to acknowledge the passing of our esteemed Life Member, Peter O’Dwyer.

Peter recorded more than 40 years continuous service with the Manly Warringah District Junior Rugby League and his contribution to our League and our game remains second to none.  He held numerous positions with the League including:

Board member to various organizations

Executive Officer to the JL for 23 years

A list of his many achievements in Rugby League is outlined below:

He also achieved the following with other sporting organisations:

We join with the Rugby League community in both the Manly District, and in fact, all across New South Wales to acknowledge Peter’s contribution to the game, and to send our sincere condolences to his family and friends.

Details of Peter’s funeral service will be published, with his families permission, when they are made available.